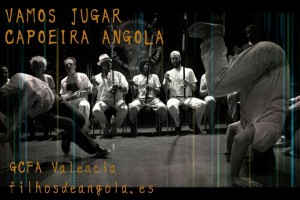 Intercultural in nature, the Capoeira Angola as we know it emerged in Brazil, led by African slaves who had to organize themselves individually, socially and culturally to win their freedom. Some tribes had been enemies or had never been in contact with each other before, others did not even speak the same dialect. However, in the new world, they had to join forces to fight against the overwhelming reality of slavery. By disguising its manifestations and rituals, the African culture was kept alive in Brazil. There, the Africans learned to communicate in Portuguese; they also learned from the indigenous people and managed to keep alive and enrich the essence of their homeland, creating what is now known as the Afro-Brazilian culture.

The music we hear in the “roda” of Capoeira Angola, the singing accompanied by the percussion instruments, carries a lot of meaning for those who are participating in the act.

Every pattern, every song is communicating something to all participants and especially to those who are playing.

The percussion session of Capoeira Angola consists of three “berimbau”, each one of them having its different tonality and its specific function in the roda, two “pandeiro”, one “agogô”, one “reco-reco” and one “atabaque”.

These elements come alive in the “roda de capoeira”. Difficult to classify, a “roda” is an event in itself, where the essence of African rituals, as well as the theatricality and the energy of the Afro-Brazilian culture are present. The roda is a circle or half-circle composed by the seated or standing participants and the percussion session. While the players at the percussion session play and sing, the people in the circle respond as a choir.
And two people dance/fight inside the circle. The players and fighters take turns to play the instruments and fight during the “roda”. The duration of a “roda” is relative and usually everyone fights, plays and sings. 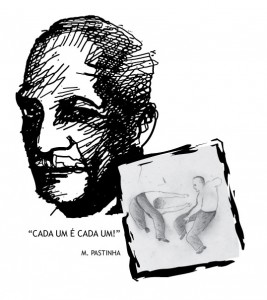 Translation: Angola, the mother of all styles of “capoeira”!
“Mandinga”(wizardry) of a slave longing for freedom;

Its principle has no method;
its purpose is inconceivable to the wisest “capoeirista” (capoeira player).

The Angola style is still alive in the 21st century, thanks to the dedication of its great masters, as Mestre Pastinha (Vicente Ferreira Pastinha, 1889-1981), the biggest guardian of its foundations.

Mestre Pastinha was the philosopher and poet of the Angola style. He was also the founder of the Capoeira Angola Sports Center, created in 1941 to keep alive the traditions of this art in a time when capoeira was at risk of losing its own character.

Today all groups of Capoeira Angola refer to Mestre Pastinha and he is still alive in the memory of the “capoeiristas”.