I post here the article written by Isa of Volem Creixer Association, after participating in a workshop of Capoeira Angola with Family. I think it illustrates well how this experience is lived. Thanks for sharing, Isa 😉 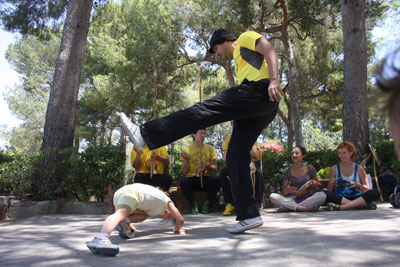 That Saturday morning, 26 October, dawned hot as summer and it seemed that we were in a trip to the tropics. We, adults, were aware that at some point we would have to unfold the inner child we carry inside. The children were keen to reencounter their friends and brought questions about capoeira.

Dani and his companion came in loaded with strange instruments and other material that attracted our attention. With his calm tone of voice and charming accent he offered us pictures where capoeira was a code, a language between two people, and took us to a fascinating distant and timeless world.

We started moving as if it was a child’s play. The jungle and savannah animals that most fascinate the kids took shape. We – the grown-ups and the children – were moving the way we could and know in a space where our glances crossed and, surprisingly, were the same.

The kangaroos played a good part and served as the hook to get the children interested in the activities when they got distracted.

In between movement games and the imitation of animals, the group dynamics changed several times and that was the most exciting as, apart from a few kids, we created a magic circle that converted us into a tribe. Our social adult point of view betrayed us as if we did not understand anything, but ultimately and from a primitive basis, we understood everything. The songs, the rhythms…all seemed to come from another culture. However, this culture was actually very close to us.

Tired of having our feet on the ground, we opted to dive into the immensity of the ocean. The blowfish or the manta ray showed us how they swing in the sea with a power of observation and prediction. We became both the manta ray and the blowfish, we moved back and forth to the rhythm of the “berimbau”. The kids also moved back and forth as they liked. We – the adults – thought that the kids were not really into the group dynamics as we were and that they were immersed in their game without being aware of what was going on.

But in the last moments of the morning, the children danced as they wished and Dani posed a challenge to the adults, an opportunity… to play with oneself. We got back to our childhood and adolescence, back when we played with our bodies to reach beyond, back when we played acrobatics.

We looked at Dani, who was doing quick and explosive movements using both arms and legs to perform manoeuvres with agility such as kicks, twists and takedowns and we laughed at our slowness. 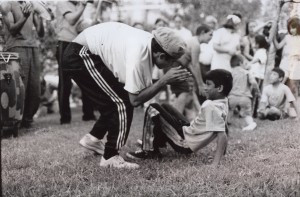 Finally, as is typical in capoeira, we made a “roda” where two participants voluntarily – one of them always being Dani – demonstrated the knack for a friendly fight, while the others formed a circle, sang and clapped their hands to give all their energy.

We enjoyed like a child, as they say… we got home, some families practiced some capoeira movements and, surprisingly, the kids had captured the essence of those dances and movements. They were unintentionally captivated by “capoeira”.

And we thought that they had no idea of what had happened… We were amazed at the things they remembered and their keenness to practice with us, we who are big kids that rarely allow ourselves to be seen.

I will conclude with these words by Dani that I lived and understood during that morning, words that I still remember: ” Capoeira promotes respect, responsibility, security, intelligence and freedom from the inside. “

And with that intelligent respect for children, from the safety and responsibility that we as adults gave them, we got a lesson to better understand freedom.

Thanks kids, thanks Dani